The railroad was tested for durability. Again

In the morning of February, 2 thousands of residents of St. Petersburg and its suburbs were late for work and studies because of the blowing up of the trolley on the section Bronevaya - Leninsky Prospect. It didn't lead to fatalities, but it paralyzed the movement of the commuter trains in the station from Baltic railway station to Ligovo for almost 5 hours. According to the preliminary version of the investigation, the cause of the explosion, as in the case of "Neva Express", became a terrorist attack.

The explosion occurred at 4:21 am at about 300 meters from the platform Bronevaya and 700 meters from the TPP-15, which supplies heat to the south-western districts of St. Petersburg. At that moment a trolley was riding through this section of railway. There were three people in it -- a driver and two construction electricians. The explosion caused the trolley to run off the track. The workers were not injured, but the engineer's leg was deeply injured. Now the driver is in the departmental hospital.

A crater with a diameter of 1 meter appeared at the site of the explosion. According to preliminary estimates of specialists, the power of the explosive device was 200-400 grams in TNT equivalent.

In exactly one hour after the trolley passed the place of explosion the first passenger train to Oranienbaum was to pass the same site. Perhaps the passage of the trolley was a surprise for offenders because this passenger train could be their target. At around 10 am train traffic was restored.

Despite the relatively low power of the explosion and the lack of victims, there is no doubt that the attack will receive considerable attention at the federal level. The crash of "Nevsky Express" occurred in similar circumstances on November 27 last year. That time 28 people died and about 100 were injured.

According to the committee of inquiry this "terroristic act" is more like a PR-action. Official representative of the committee of inquiry Vladimir Markin says: "The information about a terrorist act doesn't correspond to the facts, although, of course, it will be examined during the investigation. But probably the criminals who prepared and carried out the explosion were intended only to create a stir and to attract the attention of the mass media. 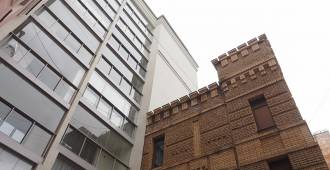