Among other significant political figures who attend the ceremony there would be Prime Minister of Denmark Lars Lokke Rasmussen and Minister of Industry and Competition Policy of Ecuador Javier Abad Vicuna.

ECUBEX is the first direct service between Ecuador and Russia. The service will be on a weekly basis. As expected, opening of the direct route will open new markets for Russian exporters. It also will increase the ability to import fresh fruits from Latin America to Russia.

After the opening ceremony, Putin will carry on a conversation with Lars Lokke Rasmussen. As expected, the heads of two governments will discuss the topical issues of bilateral economic and trade cooperation, the use of advanced technological and organizational expertise of Danish companies in modernizing the Russian economy and the prospects for increasing cooperation between Russia and Denmark.

In addition, the same day, Putin meets the Finnish President Tarja Halonen, who is in St. Petersburg for a working visit. It is expected that Deputy Prime Minister Sergei Ivanov and Minister of Economic Development Elvira Nabiullina will also attend the meeting. 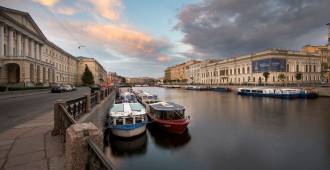